For over 30 years, SportsTalk has been the nightly meeting ground for sports fans across South Carolina. Phil Kornblut takes you on a nightly tour of The Palmetto State and it's sports-scene.  Whether it’s USC, Clemson or another in-state school they support, the fans share their feelings with Korn in what has become known as the most informative and entertaining two hours of sports talk to be found anywhere in South Carolina.

Phil was inducted in the South Carolina Sports Hall of Fame in 2018.  There's not a major sports figure in the state who hasn't graced the SportsTalk air waves over its now more than three decades of service, from governors to presidential candidates to coaches and players. SportsTalk has always been designed with the South Carolina sports fan in mind with coverage of recruiting, high schools, NASCAR, golf, the Braves and the Panthers a staple of the nightly content.

Matt Smith co-hosts SportsTalk and reports from the field to deliver coverage and analysis on the state’s largest events. In addition to 16 years in radio and sports writing, Smith has worked in a play-by-play capacity for ESPN, CSS and Raycom television broadcasts. Before joining SportsTalk, Smith also spent time as a copy editor, marketing director, and president of an ESPN radio affiliate. Smitty can still be seen on ESPN’s production of the Shrine Bowl of the Carolinas, and as a former college baseball player, takes a special interest in the state’s pursuits on the diamond. 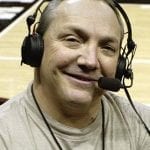